The herringbone milking system is the most common type of parlour in use today with proven efficacy over decades it is one of the most practical, flexible and labour effective batch milking parlours available.

These parlours ensure milkers can work in a stress-free environment with smooth cow traffic – Optimum animal positioning is important for easy access and good visibility of the udder during milking. Wide and animal-friendly cow standings and push-button pneumatic gates help to maximise cow throughput by encouraging fast entry and exit of the cows and reduce operator routine times so offering labour efficiency. 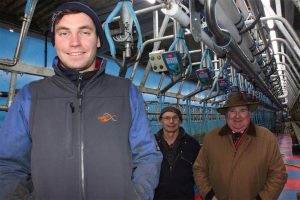 Modernising and expanding a farm’s milking facilities needn’t involve excessive capital outlay or the undertaking of major building works, as proven by the Gidlow family from Melbourne in Derbyshire who has installed a new Fullwood 30:60 parlour within the confines of their existing farm footprint.

Cousins, George and Paul Gidlow, a farm in partnership with Paul’s father, Rob, at Springwood Farm where they rent 500 acres. The family business originally started out with six cows in 1955, but today numbers 400 cows in milk.Until recently, the herd was milked through a Fullwood parlour which started life in 1972 as a 5:10 herringbone with glass jars. In 1990 the old system was extended to a 10:20 setup with

Until recently, the herd was milked through a Fullwood parlour which started life in 1972 as a 5:10 herringbone with glass jars. In 1990 the old system was extended to a 10:20 setup with ACRs, and was subsequently converted to a 20:20 facility 10 years ago.

Milking the 400 cows was taking as long as six hours at each end of the day, with the daily grind starting at four o’clock each morning. George remarks “I love milking cows, but I was starting to resent the never-ending cycle. We knew we had to do something to improve cow throughput and to make the farm more manageable”.

George and Paul were keen to upgrade the farm’s infrastructure not just for their own benefit, but also for Paul’s son, Alex. They therefore worked out that a 30:60 parlour would comfortably enable them to complete each milking in a little over two hours.

The new 85ft by 20ft parlour, a Fullwood 30:60 herringbone, was installed by Mark Bayley Ltd and in such a way that it can easily be upgraded in future years.

The Gidlows settled on the 30:60 system, electing to install another Fullwood parlour based on its simple yet robust design, value for money, and the fact that they have always used Fullwood parlours and saw no reason to change.

Since the new parlour was commissioned in December, milk production has increased by more than 400 litres per milking.

“Installing the new parlour has been life changing for everyone involved”