Modernising and expanding a farm’s milking facilities needn’t involve excessive capital outlay or the undertaking of major building works, as proven by the Gidlow family from Melbourne in Derbyshire who have installed a new Fullwood 30:60 parlour within the confines of their existing farm footprint.

Cousins, George and Paul Gidlow, farm in partnership with Paul’s father, Rob, at Springwood Farm where they rent 500 acres on a mixture of tenancy agreements. The family business originally started out with six cows in 1955, but today numbers 400 cows in milk. 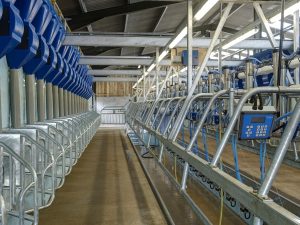 Until recently, the herd was milked through a Fullwood parlour which started life in 1972 as a 5:10 herringbone with class jars. In 1990 the old system was extended to a 10:20 setup with ACRs, and was subsequently converted to a 20:20 facility 10 years ago.

“We extended the old parlour by buying a second hand parlour and using that to double-up to a 20:20 facility,” George explains. “It was a relatively cheap way of giving ourselves more capacity and at the time was perfect for our needs. But as the herd continued to grow, we once again found ourselves being limited by the parlour’s throughput.”

Milking the 400 cows was taking as long as six hours at each end of the day, with the daily grind starting at four o’clock each morning. “Each day’s milking duties started at what was essentially still the middle of the night,” George remarks. “We’d still be washing down at 10am and within four hours, needed to be back in the parlour to start the afternoon milking.

“I love milking cows, but I was starting to resent the never-ending cycle. Even with five of us on the milking rota we were suffering and so were the cows. We knew we had to do something to improve cow throughput and to make the farm more manageable, but we were keen to keep costs to a minimum, especially as milk prices are anything but buoyant at the moment.”

The main reason for the lengthy milking times was the delay caused by getting cows in and out of the parlour. “The old parlour was typical of many 1970s installations,” George describes. “It was dark, cramped, claustrophobic and could only milk a maximum of 60-70 cows per hour. And it wasn’t conducive to making the next generation want to carry on in milk production.”

George and Paul were keen to upgrade the farm’s infrastructure not just for their own benefit, but also for Paul’s son, Alex. They therefore worked out that a 30:60 parlour would comfortably enable them to complete each milking in a little over two hours. “We’d be moving from a oneman operation to a two-man routine, but even so we’d still be saving a significant number of man-hours each day and be able to start each morning at a more sensible hour,” George continues. “We also realised there’d be some significant benefits for the cows.”

The new 85ft by 20ft parlour, a Fullwood 30:60 herringbone, was installed within the confines of an existing cubicle shed. “We did a lot of the building work ourselves, with the steel fabrication done by our neighbours, A&K Bonser. Our local electrician, RJ Watts, upgraded the shed’s electrics and Mark Bayley installed the parlour.

“Doing a lot of the construction ourselves helped to keep costs down, as did locating the new parlour in an existing building. We had thought about installing a rotary parlour, and even had discussions with our landlord about relocating the parlour to a greenfield site, but dismissed both options due to the higher building costs involved. In hindsight, we’ve achieved everything we needed to with minimal expenditure beyond the cost of the parlour itself.”

The Gidlows also considered a rapid exit parlour – to further reduce milking times – but were forced to abandon that idea due to the extra width needed to accommodate that layout. They finally settled on the 30:60 system, electing to install another Fullwood parlour based on its simple yet robust design, value for money, and the fact that they have always used Fullwood parlours and saw no reason to change.

The new parlour is relatively low-tech, but has been installed in such a way that it can easily be upgraded in future years.

“There’s always at least one cow that’ll look for leftover feed in each manger as she enters and leaves the parlour,” Alex describes, “so we decided not to install in-parlour feeders in order to speed up the loading and unloading process. We have however installed mounting brackets so that feed mangers can be easily installed at a later date if we decide we need them.”

“We’ve also fitted Fullwood’s LM1 milk meters,” George adds. “For now these are standalone units and aren’t connected to a central computer. If and when the milk price improves we’ll look at linking the parlour to Fullwood’s Crystal herd management software to monitor each cow’s performance. But for now, we’re happy just to be milking the cows more quickly.”

The parlour is also equipped with Fullwood’s Hyperclean III system – a one-button automatic plant washing system which deploys a hot alkaline clean after the morning milking and a cold acid wash in the evening.

“It’s taken some getting used to pressing ‘go’ and walking away while the parlour cleans itself, but it’s made a huge difference to our working day,” George describes. “It’s so simple to use, yet its really effective and it frees up even more time for us to concentrate on jobs away from the parlour.”

Since the new parlour was commissioned in December, milk production has increased by more than 400 litres per milking. That’s an outcome that George credits to a combination of factors. “The cows are less stressed in the new parlour, spend less time waiting to be milked and have more time in the cubicles and feed passages,” he explains. “We’re also happier as milking in no longer the chore that we had all tried to avoid.”

With the milking routine now much less time consuming, Alex has started to consider a switch to three-times-a-day milking. “Installing the new parlour has been life changing for everyone involved,” he describes. “We can easily milking 140 cows per hour and are enjoying the milking regime once again. We’ve now got the time available to milk three times a day, but we’ll have to wait for the milk price to improve before we make that particular change.”