Robotic milking technologies are becoming increasingly important in UK dairy farming – The cows are milked automatically at any time, without the need for a human worker to be present.

About 6% of UK farms already use robotic milking but they also constitute about 30% of all new milking systems being purchased.

The robotic milking machine automatically connects to the cow’s teats and turns off when the milking is complete. A safety mechanism ensures that cows can only be milked for a certain number of times per day – some cows choose to be milked four or five times.

Managing a farm with milking robots requires a different approach compared to conventional milking.
Higher milk yields and lower workforce costs are two driving factors for farmers adopting robotic milking, says Ian Ohnstad, director of the Dairy Group and a specialist in milking technology. But other farmers place higher value on other benefits, he says, such as a more flexible working day or more time available for more general work on the herd.

You can see how robotic milking works in more detail in this video. 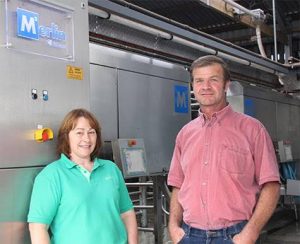 Installing a robotic milking system has enabled one Welsh dairy business to increase productivity, as well as free up time to pursue other career opportunities.

Linley and Marian Griffiths run a 120-cow herd, plus followers, on an entirely grass-based system. The business relies 100% on family labour, with Marian’s 80-year-old father, Gerwyn, still actively involved in rearing the unit’s young stock. Their 20-year-old son William has also joined the family business and he’s the impetus behind a major upgrade to the farm’s milking infrastructure.

“We were milking through an eight-stall abreast parlour, which was originally installed in 1967,” says Linley. This was upgraded in 1998 and 2012 but despite the improvements, and even with both Linley and Marian in the parlour, each milking was taking at least two hours to complete. So the couple were keen to install a new system that would not only speed up the milking routine, but would also ‘future-proof’ the farm for William’s career.

The family had previously ruled out a herringbone parlour, simply because there wasn’t enough space within their existing buildings. “I was also looking to reduce the effects that the twice-daily milking routine was having on my hands,” Linley adds. “I suffer from Raynaud’s disease, which causes severe pain in my hands and fingers when they get cold and wet. I’ve been interested in automated milking systems since the first robots were introduced to the UK in the early 1990s. I could see that they had the potential to meet all our requirements.”

The Griffiths’ herd is ideally suited to automatic milking, so the decision was made to install two Fullwood M2erlin robots. “We looked at several similar robotic systems in Ireland and worked with our local Fullwood dealer, Gareth Howells, to design a set-up that would suit our grazing-based system,” says Linley. “All we needed to do ‘building wise’ was to install a couple of new drains and lay a small area of concrete to provide a level footing for the two robots to sit on.”

Both robots feature a twin-exit design that allows cows to be directed back to the cubicle house and feed barrier, or diverted into a small holding area for veterinary attention. “That feature was one of the main reasons for choosing the Fullwood machines,” he adds. “That and the fact they are so quiet when operating, thanks to an all-electrical milking arm. Other systems use pneumatic air to move the cluster and this can be noisier and more intrusive, particularly for timid cows.”

“We had prepared ourselves for months of physically pushing the cows into the robots,” Marian says. “But by the third day the vast majority were using the robots voluntarily. It was simply a case of using the touch-screen panel on each robot to guide the cups onto the teats for the first time. After that, the robots were able to refer to each cow’s previously stored teat co-ordinates to quickly and easily attach the cluster.”

Marian and Linley’s daily routine finishes much earlier now they’re not spending several hours a day in the parlour. “The first job of the day is to check which, if any, cows are overdue to be milked and to send them to the robots” says Linley. “After that, we have more time available to walk through the cows, check for signs of bulling and keep on top of routine jobs, like foot trimming. It’s a much more relaxed and productive environment for both us and the cows.”

Situated in south-west Wales, grass grows in abundance at Blaencorse Farm and the herd grazes from the end of March through to mid-October, with 24-hour access to fresh grass during the summer. “We’ve installed a segregation gate in the cubicle shed to prevent cows going outside if they are due to be milked,” explains Linley. “During the robots’ first winter, when the cows were housed, we were averaging 3.3 milkings per cow per day, with the high yielders reaching five or more milkings.
“And even with 24-hour access to grass, the herd is still averaging between 2.5 and 2.7 milkings per day. The increased frequency has had a direct impact on productivity, with average milk yields increasing during the first six months from 9,000 litres to 9,300 litres per cow.”

The M2erlin robots have certainly proved to be a solution to the Griffiths family’s milking issues. “We’ve installed a new milking setup with minimal disruption to the herd and seen a good increase in milk yields. Our working day is more productive and the unit is now set up for a long future in milk production,” says Linley.

“The robots also allow William to pursue a career away from the unit. He is balancing a part-time job as an AI technician alongside his farming commitments. That is a huge positive for him and the business because it means that he can earn an income away from the farm and is less vulnerable to volatile milk prices.”